Tom Clavin, author of Tombstone: The Earp Brothers, Doc Holliday, and the Vendetta Ride from Hell 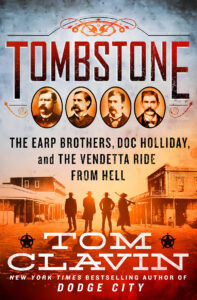 Tom Clavin, #1 New York Times Bestselling Author, will present his new book Tombstone: The Earp Brothers, Doc Holliday, and The Vendetta Ride from Hell. The author of many bestsellers, he has worked as a newspaper editor, magazine writer, tv and radio commentator, and as a reporter for The New York Times. Tom Clavin lives in Sag Harbor, New York. If his name sounds familiar to you it is because he co-authored Valley Forge in 2018 and this Winsor Room author event attracted a big crowd.Tombstone is the true story of the Earp Brothers, Doc Holliday, and the famous Gunfight at the O.K. Corral in Tombstone, Arizona. On the afternoon of October 26, 1881, nine men clashed in what would be known as the most famous shootout in American frontier history. Clavin, the journalist, briskly sketches dozens of historical figures in his book and separates fact from fiction. Copies will be available from Main Point Books. 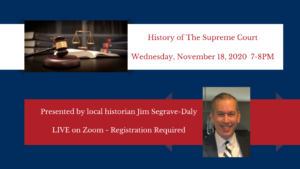 With the confirmation of a new Justice upon us, join local historian Jim Segrave-Daly for a discussion of the history of the Supreme Court. We’ll look at its creation and the roles that Chief Justices Marshall, Taney, Warren & others have played, as well as some of the Court’s landmark decisions.

The Philadelphia Print Shop on The Main Line

Since its founding in Chestnut Hill in 1982 by former curator of Revolutionary Maps with the Library of Congress, Dr. Don Cresswell, The Philadelphia Print Shop has earned a national and distinguished reputation for its extensive collections and excellent customer service. While much of The Philadelphia Print Shop’s business is conducted online, proud owner and local collector David Mackey believes his new storefront is essential to all who share his enthusiasm for finding antique prints, historic maps, rare books and more.  In this live Zoom presentation, David will open the Wayne doors to the iconic print shop and share his joy of collecting, his passion for local history, and show examples from his vast collections.

There’s No Place Like Home
with author Irene Levy Baker

Although we’re not traveling much, we can still have lots of fun in the Philadelphia region. And Irene Levy Baker, author of 100 Things To Do In Philadelphia and Unique Eats & Eateries of Philadelphia is here to explain how. She’ll help you plan a staycation and make sure you never waste your free time doing laundry. Hear stories about where to have adventures including good places to social distance, secret destinations even long-time locals don’t know about, where to create fun family memories and how to help restaurants survive with limited capacity.

Join local historian Jim Segrave-Daly for a discussion of one of the most pivotal times in American history, Christmas 1776. From the reading of Thomas Paine’s American Crisis to his troops to the Battle of Trenton, we’ll uncover why Washington’s plans, fraught with danger, helped to save the American cause in the Revolution.

The “Mumbet” recorded performance is based on the true story of Elizabeth “Mumbet” Freeman, a young enslaved woman who won her freedom in court in 1781, citing language in the Massachusetts constitution: “all men are born free and equal.” Mumbet’s case was a precursor to the 1783 decision that ended slavery in Massachusetts. In character as former enslaved Mumbet, storyteller Denease tells the story of a fascinating woman whose courage had an enormous impact on the lives of millions. Mumbet spent 30 years enslaved in the household of Colonel John Ashley of Sheffield, MA, before hiring a lawyer, Theodore Sedgwick, and successfully suing for her freedom in court. Once free, she took the name Elizabeth Freeman, and was employed by the Sedgwick family as a nurse, healer and midwife. Elizabeth “Mumbet” Freeman once said, “Anytime while I was a slave, if one minute’s freedom had been offered to me, and I was told I would die at the end of that minute, I would have taken it, just to stand on God’s green earth a free woman.” Storyteller Denease grew up in Mississippi listening to stories told by her own great grandmother, a former enslaved person who lived to the age of 125. “It’s amazing to me that living now, nearly 150 years after the Emancipation Proclamation that, I personally knew — and loved dearly — someone who survived slavery,” Denease says. “I draw on my great-grandmother’s own life story for inspiration when portraying Mumbet.”

Thursday, February 11, 2021
LIVE on Zoom with registration at Delcolibraries LibCal 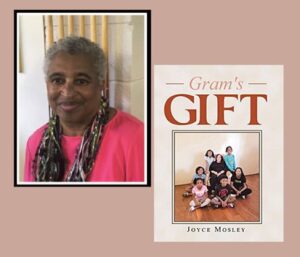 Join us for a conversation with Joyce Mosley, author of Gram’s Gift (AuthorHouse, 2020). Gram’s Gift tells the story of an African-American family with African, European, and Native American roots. Gram decided it was time for her grandchildren to know the contributions made by their ancestors. Her lesson begins with Cyrus Bustill, who was born enslaved, purchased his freedom, operated a successful bakery business, and provided bread to George Washington’s troops camped at Valley Forge during the Revolutionary War.

In 2019, Joyce’s family research was featured in a PBS episode of “Movers and Makers.” 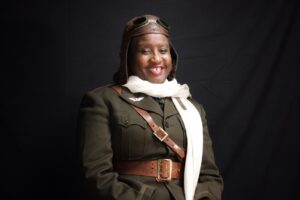 Portraying Bessie Coleman on video, Tammy takes you on a journey into the world of the First Negro Aviatrix. The story begins in Atlanta, Texas, 1892, with Bessie Coleman, the daughter of an African American maid and sharecropper of mixed Native American and African American descent. Bessie had 12 brothers and sisters. It was a time when cotton was king, Jim Crow ruled underneath white sheets, and the color of your skin could determine whether you lived or died. At age 23, after having faced discrimination at home, Coleman moved to France to learn to fly.

Tammy Denease was born in Columbus, Mississippi where she spent countless hours with her great-grandmother and grandmother, who were known storytellers. Great-grandmother Mary Baxter Johnson was a former enslaved person. This gift of storytelling has been passed on to Tammy, who in addition to her position as museum educator, is a teacher, a playwright, and Director and Diversity Trainer for an international organization.

The Doctors Blackwell: A Conversation with Author Janice P. Nimura 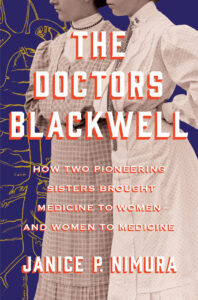 Janice P. Nimura is the author of the new engrossing and enlightening group biography, The Doctors Blackwell: How Two Pioneering Sisters Brought Medicine to Women and Women to Medicine. In bringing the Blackwells’ world to life, Nimura maintains narrative momentum, packing the text with memorable vignettes that reads like historical fiction. Peppered with appearances of Abraham Lincoln, Florence Nightingale, Susan B. Anthony, and others, the book affirms the prominent place of the Blackwell sisters in medical history. Books will be available from Main Point Books.

An Evening with Robert Strauss in conversation with Stephen Fried discussing John Marshall: The Final Founder 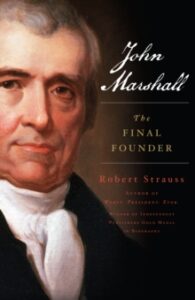 When did the Founding end? 18th and 19th-century contemporaries believed John Marshall to be, if not the equal of George Washington and Benjamin Franklin, at least very close to that pantheon. In his new book, journalist and historian Robert Strauss recounts how the Chief Justice acted as the glue that held the Union together after the original founding days.The Supreme Court met in the basement of the new Capitol building in Washington when Marshall took over, which is just what the executive and legislative branches thought of the judiciary. Strauss will be in conversation with award-winning journalist Stephen Fried, author of Rush: Revolution, Madness & the Visionary Doctor Who Became a Founding Father. Entertaining historical tidbits from Strauss will surely be devoured along with more bits and pieces served up by Fried at this feast for history lovers. Books will be available from Main Point Books. 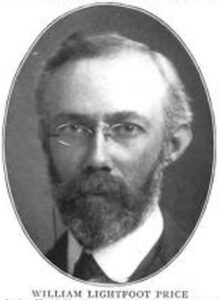 William L. Price (1861-1916) was the primary architect for the original developments of North and South Wayne. His “pen” designed over 100 houses in Radnor Township and so much more. Price’s career began in Wayne, then Overbrook Farms, designing the model homes for Wendell & Smith – yet left a lasting legacy throughout the Delaware Valley, though his career lasted only 38 years. During the time his expertise grew, Will Price was the designer of majestic estates for the wealthy industrialists of the late 19th century. At the turn of the 20th century, his focus became the creation of two Arts & Crafts communities, Arden and Rose Valley.

Rachel Carson, born on a Springdale, Pennsylvania farm in 1907, is remembered today as the woman who challenged the notion that humans could obtain mastery over nature by chemicals, bombs and space travel than for her studies of ocean life. Her sensational book, Silent Spring (1962) warned of the dangers to all natural systems from the misuse of chemical pesticides such as DDT, and questioned the scope and direction of modern science, initiating the contemporary environmental movement. The author of many books, beginning with Under the Sea Wind (1941) and having worked in government during World War II, the scholar took advantage of the latest scientific material for her next book. By the 1950’s, Carson’s ecological vision of the oceans showed her embrace of a larger environmental ethic. Climate Change, rising sea-levels, melting Arctic glaciers, collapsing bird and animal populations, crumbling geological faults–all are part of Carson’s work. Join our audience as Pat Jordan, professional actor, playwright, and director, brings Rachel Carson to life in this virtual one-woman LIVE performance. Jordan’s passion for history has led her to portray many famous women in American history at venues such as the National Archives in Washington, DC, the Smithsonian Institution, as well as in historical films and of course, in schools and libraries.

Saturday, July 10, 2021, 2-4pm
(Rain/heat date July 11, 2021, 2-4pm)
Begins and ends at the Finley House, 113 W. Beechtree Lane, Wayne
Join us to learn about the extraordinary history of this small town in the heart of the Main Line, home to architectural works by some of Philadelphia’s biggest names. Horace Trumbauer, William L. Price, and even Louis Kahn designed buildings in Wayne early in their careers.
Local historian Greg Prichard will lead the tour, which will be about 6 miles long and will take about 2 hours. Includes moderate hills and many stops to admire Wayne’s great landmarks.
Attendance will be limited to 20 participants, advance registration required.
This tour is co-presented by the Young Friends of the Preservation Alliance, the Radnor Historical Society, and the Lower Merion Conservancy.
Tickets are $15 for members of any of these three groups, or $20 for non-members.