By far the most detailed records of life in any town are found in the archives of its newspapers. Throughout the years of its existence the Radnor Historical Society’s collection has accumulated a number of important newspapers that were based in Wayne during its formative years. Over time these small papers closed, merged to create larger papers, and were largely forgotten. We are proud to make these digitized copies of historic Wayne newspapers – the only copies belived to be in existence – available online to read and search through.

We will continue to add more newspapers to this online collection as they are scanned. We owe many thanks to Villanova University’s Falvey Memorial Library for scanning these historic newspapers and hosting them within their extensive online archive, much of which documents many other aspects of local history.

All newspapers have been scanned using OCR technology, making the text searchable via the Falvey Memorial Library’s online archive search. 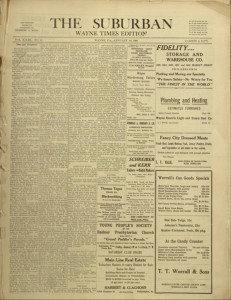 Wayne’s longest-running newspaper is the best record of life and events in our area covering more than a century of history. Having been established as the Wayne Times in 1885, the Suburban and Wayne Times’s plant caught fire in 1906 destroying all of its records, making earlier archives fragmentary. All volumes from 1906 forward have survived with the exception of 1909. They were placed into the long-term care of the Radnor Historical Society following the closure of the newspaper’s longtime headquarters on North Wayne Avenue. The digitization of the Suburban is ongoing and additional volumes will be published online as they are scanned.

View and Search This Newspaper on the Falvey Memorial Library’s website: 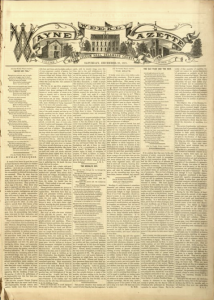 The Gazette was published during the formative years of “Louella,” J. Henry Askin’s fledgeling suburban community. Askin built a town hall, Lyceum, and Presbyterian Church in the few short years of Louella’s existence prior to the Depression of 1873, and those three structures are featured in the newspaper’s decorative masthead. The accounts of life in Louella/Wayne during these years are a priceless record documenting the earliest years of the town’s existence. 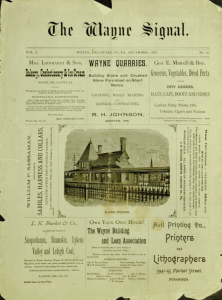 Published by the Wayne Presbyterian Church

The Signal was printed during a time when the development of Wayne was progressing rapidly. Though published by the church and focused heavily on religious topics, the engravings, articles, and especially advertisements give a unique insight into the changes the town was then experiencing.