Times & details for all events may be subject to change. Check back for latest information. 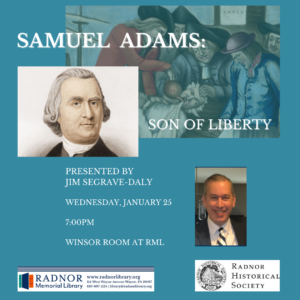 To commemorate the 250th anniversary of the Boston Tea Party, join local historian and Radnor Historical Society member Jim Segrave-Daly to discuss the unlikely rise of Samuel Adams from an unfocused man of means to the founder of the Sons of Liberty, mastermind of the Boston Tea Party and most wanted radical who steered America towards independence.

The Olmsted Brothers firm took its name from two of its founding partners: Frederick Law Olmsted, Jr. and John Charles Olmsted. These two men (who were, in fact, cousins raised as brothers) trained under Frederick Law Olmsted, Sr., a talent widely recognized as the “father of American landscape design.” Olmsted, Sr., who was born in 1822 and died in 1903, had a monumental influence on the course of landscape design and theory in the United States. Although best known a partner in the design of Central Park, Olmsted, Sr.’s public commissions also include plans for national, state, and local parks, colleges and universities, and residential properties (including George W. Vanderbilt II’s Biltmore estate in Asheville, North Carolina).

Olmsted Brothers and its successors operated from the late 1800 through the 1970s. Most of the firm’s work, however, was executed during the first three decades of the twentieth century. Although headquartered in Boston, the firm was exceptionally active in the Philadelphia area. In Lower Merion and Radnor, where large country estates were omnipresent, Olmsted Brothers designed at least 50 properties between 1900 and 1935. None of these landscapes are fully intact, but many retain traces or even significant elements of their original designs.

Join the Lower Merion Conservancy and the Radnor Historical Society as we discuss the depth and breadth of Olmsted Brothers work in the United States. We will consider some of the firm’s projects in Lower Merion and Radnor and reveal extant elements of the firm’s local work that are “hidden in plain sight.” The event will take place at Laurier, a magnificent property in Radnor Township that retains elements of its 1916 Olmsted Brothers-designed landscape. Lecturers include Emily Cooperman, landscape and architectural historian; Dennis Montagna, National Park Service Program Lead for the North Atlantic-Appalachian Region; Greg Prichard, Historic Preservation Planner for Lower Merion Township, and Kathleen Abplanalp, Director of Historic Preservation for the Lower Merion Conservancy.

This event is limited to 30 people. A 1 p.m. wine and cheese reception will precede the lecture. The lecture will begin at 1:30 p.m. and will be followed by a stroll around the grounds of Laurier. Please dress for the weather and wear comfortable shoes.

Prior to the event, registered guests will receive an email with the address of the property and parking instructions.

This event is being co-hosted by the Radnor Historical Society and the Lower Merion Conservancy.

Jonathan Darman, author of Becoming FDR: The Personal Crisis That Made a President 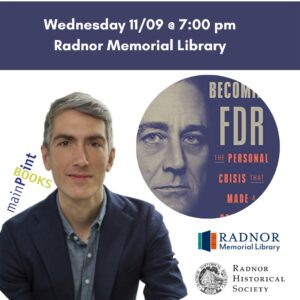 Vivid, moving, and full of new insights, Becoming FDR tells the riveting story of how Roosevelt’s struggle with polio forged his character and precipitated his political ascent. Compellingly written and full of illuminating details, this important and sensitively drawn portrait traces the transformation of character and abilities that occurred between 1921, when Roosevelt contracted polio at the age of thirty-nine, and 1928, when he reemerged as the Democratic candidate for governor of New York. It was during those crucial and challenging years, Darman illustrates, that Roosevelt grew to become compassionate and shrewd, tailoring his speeches to inspire listeners and to reach them through the new medium of radio. His suffering cemented his bond with those he once famously called “the forgotten man.” Most significantly, he had discovered how to find hope in a seemingly hopeless situation—a skill that he employed to motivate Americans through the Great Depression and World War II.

Jonathan Darman is the author of Landslide: LBJ and Ronald Reagan at the Dawn of a New America. He is a former correspondent for Newsweek, where he covered national politics, including John Kerry’s and Hillary Clinton’s presidential campaigns.

Co-sponsored by the Radnor Memorial Library and Main Point Books.

This year, along with our partners at the Wayne Business Association, we will honor Cowan’s Flowers for their 100th anniversary!

As always, there will be singing and holiday treats, plus a chance to view the Finley House and our Wagon Barn. Most important, we will have a visit from Santa, from whom all children in attendance will receive a special coloring page and an RHS box of crayons.

We look forward to seeing everyone on December 4th!

C.J. McGroarty, Author of Clara in a Time of War 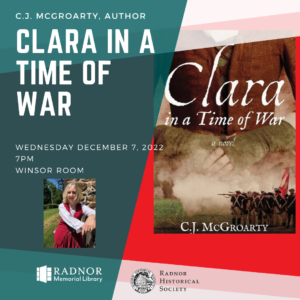 Join C.J. McGroarty for a reading and discussion of her new book Clara in a Time of War, a compelling story of historical fiction set in 1777 Chester County. As war is raging in the American Colonies, Clara Fletcher struggles to make do on her Chester County farm while her husband is off in the fight. As the British Army embarks on its Philadelphia Campaign, the woman’s life takes an unexpected turn. One morning, a wounded man is discovered by her son in the carriage house and an even bigger threat looms as Clara must keep a secret for as long as she can.

Author C.J. McGroarty is a former reporter for The Philadelphia Inquirer and a Pushcart Prize nominee with an MFA in creative writing. Her work has appeared in a variety of literary journals and magazines. Co-sponsored by the Radnor Memorial Library. Books will be available for purchase.

Bruce E. Mowday returns to the Winsor Room to present his latest book, Lafayette at Brandywine: The Making of an American Hero. In his book Mowday explores Lafayette’s role in the fight for America’s independence, and how the fact that he was wounded at the Battle of Brandywine, turned a defeat into a turning point of the war and made Lafayette into an American hero.

Bruce E. Mowday is an award winning author and newspaper reporter. He has written a number of books in different genres including crime, sports, business and history. 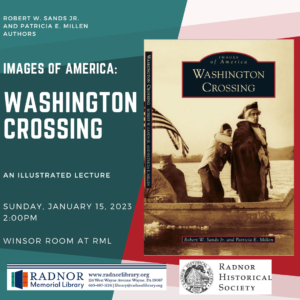 Washington Crossing is one of America’s most revered historic landmarks. The crossing site is marked by the creation of two historic parks: Washington Crossing State Park, New Jersey, created in 1912, and Washington Crossing Historic Park, Pennsylvania, created in 1917. The book illustrates how these two parks commemorate George Washington’s courage to lead his army across the ice-choked Delaware River on Christmas night 1776 to attack an isolated garrison of Hessians located at Trenton, which would turn the tide of the American Revolution. Books will be available for purchase.