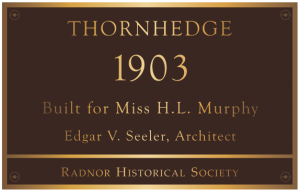 This fall, twelve Radnor Township buildings will display handsome bronze plaques that honor their history. Their owners are the first participants in the new RHS initiative that has been created to recognize good examples of preservation that contribute in a positive way to the appreciation of the Township’s architectural heritage. The twelve buildings are:

•  Isle Field, renamed Almondbury House, built 1911 in Rosemont and designed by Horace Trumbauer. It is now

the headquarters of the American Missionary Fellowship.

Applications for markers can be found on the RHS website, www.radnorhistory.org/marker, or may be picked up at the Finley House. The cost is $200. Having a marker does not carry with it any regulations or limitations on your property but is simply a recognition of your architectural stewardship.

(This article appeared in the September, 2011 Radnor Historical Society Newsletter. To receive the newsletter in the mail, consider becoming a member!)