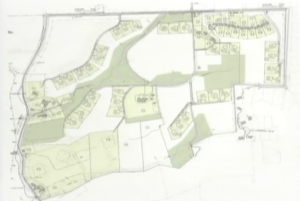 For the past four months, the discussion of a new garage on the east lawn of the Louella mansion in Wayne has dominated many township meetings. The would-be developers of the property, C.F. Holloway III & Co., would like to turn the mansion into 12 condominiums (from 25 apartments), replace historic features such as the windows and dormers, and build a 24-car garage on the east lawn. The Commissioners meeting of June 20 followed up the June 1 Historic and Architectural Review Board (HARB) meeting, during which the HARB approved of an underground garage for the east lawn.

One Louella Court resident pointed out that the approved garage will link with the historic structure, and thus some demolition will be necessary. The HARB ruled on the garage, but did not consider its link with the mansion because a discussion about changes to the mansion as a whole was to be addressed at a future meeting. Dave Falcone, lawyer for C.F. Holloway III & Co., refuted this claim, saying that changes to the east side of the building were part of the discussion on the table and were shown on the plans submitted. South Wayne resident Baron Gemmer testified that changes to the main building were not discussed at the HARB meeting by either side. While referencing a drawing from the architect, Gemmer stated, “these windows and these stairs are all being demolished. What’s more important is not that they should have to come back, it’s that they can’t build the garage without demolishing this… to me the application is incomplete.” A drawing of the proposed changes shows that basement windows would be covered by the garage, which would be built above the current grade.

The implication was that the discussion of the garage and changes to the east façade of the mansion go hand in hand, and the HARB had not adequately addressed the mansion or clarified that any changes to the mansion be voted on separately. Mr. Falcone stated his belief that those changes were shown in the plans submitted to the HARB, and that the approved garage construction could not be possible without the demolition. Mr. Holloway then spoke, stating that the connection of the garage to the building was discussed at all of the HARB meetings. “There was no question on HARB’s part as to where the building was going to be connected,” Holloway stated. “I find it interesting that there are certain people that are trying to delay this application when the connection of the underground garage was thoroughly discussed and approved by the HARB.” No members of the HARB were present at the Board of Commissioners meeting to clarify how they interpreted the plans.

Regarding the value of the windows set to be removed for the garage connection, Ward 4 Commissioner Elaine Shaeffer stated, “that’s what our HARB is there to protect; when there is a demolition of assets on a historic building that has been designated historic there needs to be that discussion.”

Mr. Holloway stated that he was “flabbergasted” by the process, at the prospect of having to go before the HARB for a fourth time. The confusion stemmed from whether the HARB approved the idea of the underground garage, or the full plans which imply that basement windows would be demolished. In the end, the Commissioners voted 3-2 (with one recusal) to table the approval and send it back to HARB, with the condition that the HARB come back to the Commissioners at their very next meeting to clarify their position. The HARB’s next meeting is July 6.

The discussion, which lasted over an hour, can be viewed below.

Note: This is the first installment of the News & Preservation blog’s synopses of Radnor Township Historic and Architectural Review Board (HARB) meetings. These meetings are vital to preservation efforts and oversight in the township, and provide interesting insights into the state of Radnor’s historic resources.

An architect showed drawings for a proposed addition to this home in the South Wayne Historic District. Changes include a mudroom side addition (one story) and a family room rear addition (one story). A glass enclosure on the front porch would be removed to restore the historically appropriate appearance to the home’s front elevation. The HARB voted for a certificate of appropriateness 3-0.

This building, currently a 5-unit apartment building, is a 19th century structure with a mansard roof in the Second Empire style. It is located on the corner of Bloomingdale Avenue, a road where several houses of the same style were built in the 1870s as Wayne’s first planned development. Though 200 West Wayne matches the homes on Bloomingdale closely in style, it dates from a later time.

The proposed changes to the property involve removing a non-historic garage and constructing a rear addition to the building. The addition will have a mansard roof to match the existing structure, though it will be one story lower than the existing structure. According to the developer, the building will remain a 5-unit complex. The new addition is to include two arched garage door openings facing the east driveway from Bloomingdale Avenue.

The building has been neglected over the years, its windows replaced indiscriminately. “The building needs everything,” said builder Matt Paolino in response to HARB member Andrea Pilling’s question regarding a previous proposal to demolish the building and construct a similar one in its place. “At the end of the day, I just didn’t think there would be the appetite in the community to lose the building.” Restoring the structure was the developer’s first plan of action, and they have returned to that plan despite the additional work.

The HARB approved a certificate of appropriateness 3-0.

The bulk of the meeting concerned the proposed underground garage for the Louella House, set to be converted into a condominium complex by developer C.F. Holloway, III. Following the HARB’s denial of the previous proposal regarding this property (upheld by the Board of Commissioners), Dave Falcone, a lawyer with Saul Ewing, presented what he called an “ultimate solution” to a parking garage on the site, an underground garage with no above-ground parking. An entrance to the underground garage would be found to the east of the Louella mansion, facing south, across from two existing residential driveways on Louella Court.

Gordon Eadie created a landscaping plan for the new proposal. A flagstone patio adjoining the east side of the mansion would link the residences to the garage. 11 trees will be removed, and 18 will be planted.

Mr. Holloway stated that historically significant stairs on the west end of the mansion will be removed, and possibly relocated to another part of the property.

One Louella Court resident voiced concerns about possible detrimental effects of underground garages on historic structures. Other speakers’ concerns included changes to the building’s historic fabric, gentrification due to the building’s conversion into higher-end residences, the loss of existing trees, the effect of headlights of cars coming out of the garage, and more. The interaction between Louella Court neighbors and the developer was tense at times.

Despite the discussion about the house and grounds, the issue on the table at this particular meeting was the garage. In the end, the board members issued a certificate of appropriateness for the underground garage. The developer will likely have to go before the board again to present exterior alterations to the mansion.